Our thanks to Erika and Marco for their excellent talks at our post-doc panel! 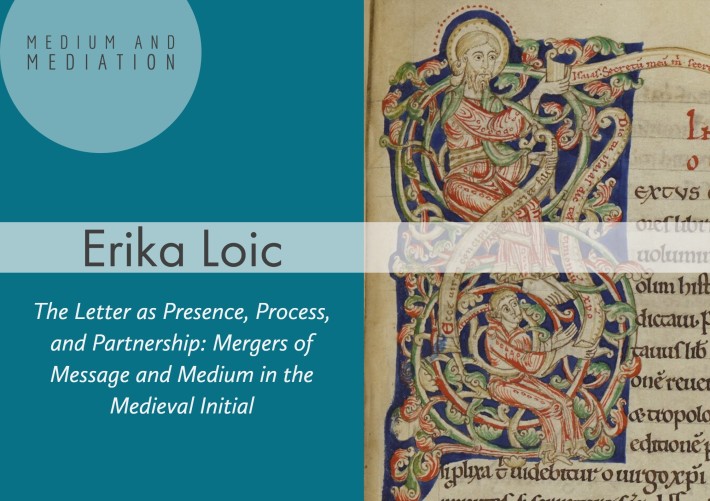 The Letter as Presence, Process, and Partnership: Mergers of Message and Medium in the Medieval Initial

In light of recent research into the mediality and materiality of text, I take a retrospective look at medieval initials to interrogate their much earlier varieties of multimodal meaning making. I review a particular type of decorated initial that incorporates images of dialogue, authorship, and scribal practice. Monastic scribes reflected on divine communication in its multifarious forms by integrating message and medium into their letter designs, many of which were self-reflexive and visually dynamic. Their inventive creations embodied their attitudes towards the written and spoken word as presence (material, corporeal, sacred), process (technical, sensory), and partnership (expressive, interpretative). Following an introduction to the graphic culture of early Christianity, I cover examples that span a period beginning around the year 800 and concluding in the twelfth century, when it became increasingly common for book illuminators to flourish outside of strictly monastic contexts.

Blood Devotion and Flagellant Practices in Fra Angelico’s Frescos for the Cells of the Novitiates at the Convent of San Marco, Florence

This talk will examine Fra Angelico’s (1395 – 1455) cycle of frescoes found in the Priory of San Marco in Florence in light of medieval blood devotion and flagellant practices in Italian lands. I will focus mainly on the theological and historical background that fostered the creation of such frescoes, and its legacy in late medieval/Renaissance Florence. Disputes on the Holy Blood and the spreading of medieval forms of blood devotion in Dominican narratives will be taken into consideration, as well as the influence of flagellant confraternities in public and private ceremonies in Central and Northern Italy. In addition, the paper will highlight the impact of Fra Angelico’s iconography in the works of Dominican friar Girolamo Savonarola (1452 – 1498) and his most faithful followers.